Map of the global distribution of cattle in 2006, by Tim Robinson et al., May 2014 (image credit: ILRI et al./Livestock Geo-Wiki).

This blog article is written by ILRI scientist Tim Robinson.

The International Livestock Research Institute (ILRI), the Food and Agriculture Organization of the United Nations (FAO), the Environmental Research Group Oxford (ERGO), the University of Oxford and the Université Libre de Bruxelles (ULB) joined forces to map the global distribution and abundance of livestock. These new datasets are freely accessible through a Livestock-Geo-Wiki, a site maintained by our collaborators at the International Institute for Applied Systems Analysis (IIASA).

Growth in demand for animal-source foods has never been greater. In developing countries, the meat and dairy sectors have grown at average yearly rates of 5.1% and 3.6%, respectively, since 1970 and it is forecast that demand for these commodities in 2050 will increase by 73% and 58%, respectively, from their 2010 levels. This growth in demand is driven not only by population increase – the world population will grow from 7.2 billion today to 9.6 billion in 2050 – but also by changing consumption patterns linked to increasing wealth and urbanization. The growing livestock sector places ever greater pressure on our natural resources and the environment, contributing significantly to global environmental change with a recently estimated 14.5% of anthropogenic greenhouse gas emissions attributable to the sector. Also of concern are the public health implications of livestock production and intensification.

As pressure on our global resources increases, people and their livestock are pushed into ever-closer proximity with natural areas and the habitats of wild fauna, increasing the chances of emergence and spread, in livestock and people, of infectious zoonotic pathogens originating in wild animals. Use of antibiotics as a growth promoter and overuse of antibiotics in intensive livestock production systems contribute to increasing prevalence of antibiotic resistance both at local and global levels. Many human pathogens have livestock origins. And it is also estimated that one in three adults in the world – 1.46 billion – is obese or overweight, a problem to which over-consumption of heavily processed livestock products contributes significantly. 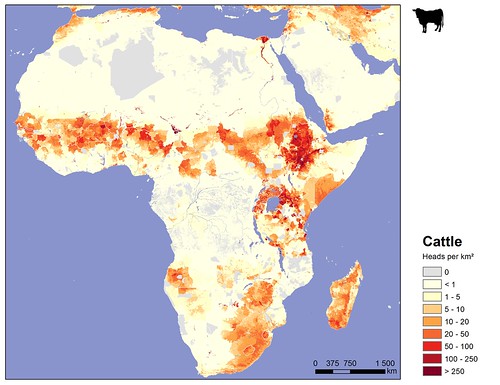 New map of the distributions of cattle in Africa, by Tim Robinson et al., May 2014 (image credit: ILRI et al./Livestock-Geo-Wiki).

Livestock contributes directly to the livelihoods and food security of almost a billion people. As well as the economic benefits that a growing livestock sector confers on the economies of poor countries, and the potential improvements in food security and nutrition among the world’s poor, some 766 million poor livestock keepers (living on less than US$2 per day) could benefit directly from livestock sector growth. This is particularly the case in mixed farming systems where livestock serve many socio-economic functions and promote arable agriculture through manure and draft power. Whereas 70% of the grains used by developed countries are fed to livestock, foraging animals in developing countries typically consume foods that humans cannot eat and produce nutritious meat and milk in areas unsuitable for crop production. In a world with more than 800 million (1 in 7) undernourished and hungry and 165 million children permanently harmed through stunting, there has never been a greater need for equitable, balanced and efficient food production. The global livestock sector plays an essential roll in achieving this.

Read more about this on ILRI’s News Blog:
A new map for navigating a sea of change in livestock production, by Matthew Davis, 30 May 2014.

Partners in the Livestock Geo-Wiki (May 2014)