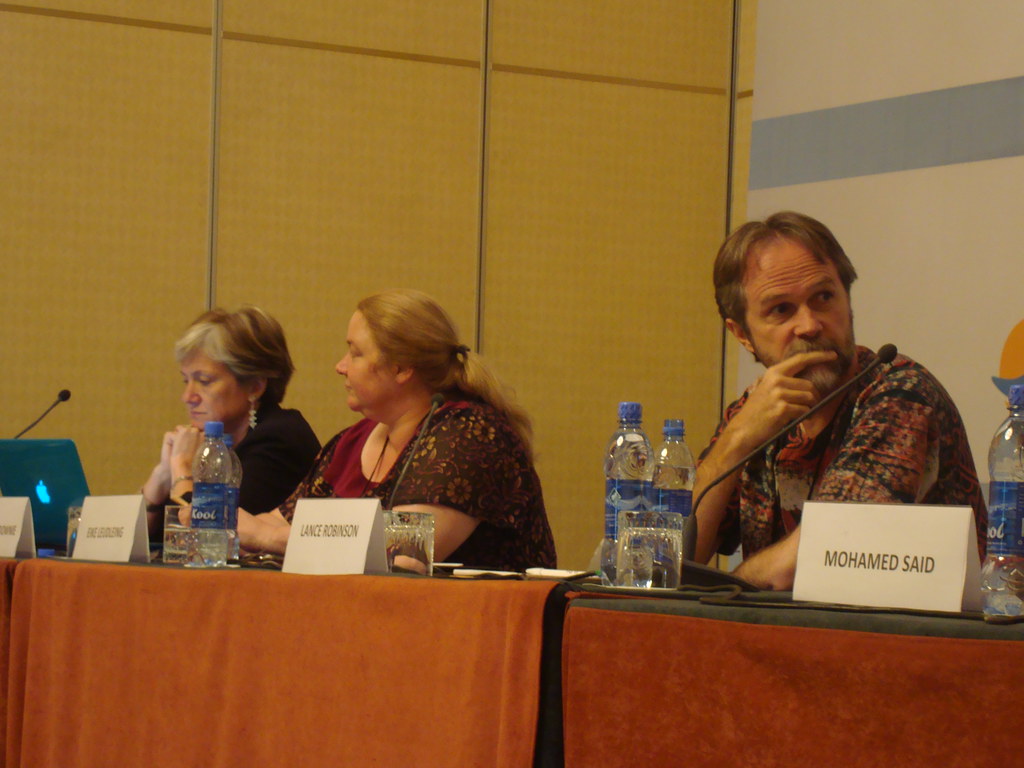 A section of the panelists during the side event: from left, Polly Ericksen Katherine Downie and Lance Robinson

At the recent ‘2020 resilience‘ event in Addis Ababa, scientists from the International Livestock Research Institute (ILRI) organized a side event on ‘measuring and evaluating resilience in drylands of East Africa.’ Panelists from  ILRI and the  World Agroforestry Centre (ICRAF) shared findings on ways to measure and evaluate resilience.

A fundamental issue raised by all the panelists was baseline data. Katherine Downie, coordinator of the Technical Consortium for Building Resilience in the Horn of Africa, mentioned that governments in the Horn of Africa need to  attribute the impact of their investments in terms of enhanced resilience, however they usually lack  empirical information and baseline data to help set priorities and measure any significant changes from investments. They also lack specific indicators to measure resilience and the results of investments to enhance it.

Eike Luedeling from ICRAF emphasized that research and development only has impact if it leads to better decisions. Centering his presentation on ‘supporting decision making for resilient environments through Decision Support Systems’, Luedeling called for participatory development of a comprehensive business-case model for decisions to help decision makers define their current states of uncertainty. This, he argued would help address issues of data scarcity that currently challenge decisions on dryland resilience.

Coping with shocks is important, but not enough. There is need for indicators on the extent of severity of the shocks. – Lance Robinson

While the overall conference adopted a working definition of resilience as ‘the ability to recover to the original state after experiencing shocks and stresses’, Lance Robinson (ILRI) brought in some new dimensions in his presentation. Categorizing resilience into socio-ecological and developmental where the former’s focus is on systems while the latter’s focus is on households, he highlighted that socio-ecological resilience is not necessarily desirable, due to issues such as poverty traps. Robinson asserted that coping with shocks is important, but not enough, thus we need indicators on the extent of the severity of shocks. Downie equally emphasized that sustainable resilience will only be achieved through a combination of both systems resilience and development resilience, hence the need to understand both perspectives.

Mohamed Said (ILRI) demonstrated how his team has been able to measure resilience by looking at trends in land cover changes and their impacts on pastoral communities. Said suggested that issues around arid lands need to be more closely associated with watersheds; further that in measuring resilience, the focus should be on population. He argued that there is a direct relationship between population and vegetation cover, whereby increases in population lead to decreases in land cover.

Bernard Bett from ILRI’s Food Safety and Zoonoses program explained how a disease like Rift Valley fever (RVF) can be seen as a shock, and how researchers were able to measure its impact on resilience. RVF occurs in irregular patterns, is difficult to predict and results from the convergence of various socio-ecological drivers and impacts. Its management requires a multidisciplinary approach and partnerships. Bett emphasized how building resilience to this shock requires attention to the impacts on traders. This brings in sociological dynamics and it is difficult to measure these impacts using models. Hence it is necessary to also use participatory approaches.

These presentations were followed by group discussions among the 60 participants, focusing on three main issues:

Participants highlighted that a major part of the solution on indicators requires arriving at a consensus on what is good enough in terms of the data for the baseline survey. We need scientists to share more data and information.

We need better, baseline data, which should be made more accessible. ~ Tom Beck, USAID

To help policy makers make better decisions based on ecological indicators and actions needed for dealing with the shocks, we need to better capitalize on past work, establishing where gaps exist and how to address them. We also need to establish linkages and ensure findings are properly disseminated to promote more uptake and application of available knowledge.

Watch video recordings from the session