This is the seventh entry of the resilience blog series, written by Davies Jonathan, the Coordinator of the Global Drylands Initiative at the the International Union for Conservation of Nature, IUCN. Jonathan is also a co-author in a recently produced article which is featured in this blog series 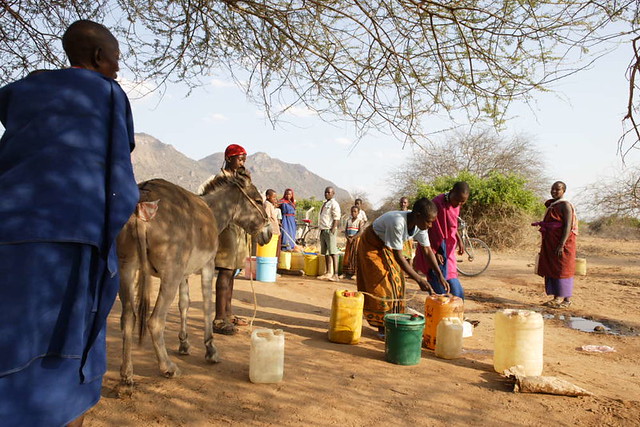 Water collection for animals and domestic use in Tanzania (photo credit: IUCN)

The International Monetary Fund’s Survey Magazine of April 28, 2015, runs the banner headline ‘Resilient Growth in Sub-Saharan Africa, Despite Strong Headwinds’. The International Monetary Fund (IMF), the Organisation for Economic Co-operation and Development (OECD), and the Development Banks routinely use the term ’Resilient Growth’ in a sense that resonates with our concept of Development Process Resilience. Whilst economic growth alone may not be an ideal indicator of development, ‘resilient growth’, measured in terms of the rate of change in GDP, is a measure of progress towards one particular development goal; in this way, it is akin to what we are calling development process resilience.

Whether or not the term ‘resilience’ should be used in this context is less interesting to me than what is meant by use of the term. The term is in colloquial usage and it is informative to explore how the normative use of ‘resilience’ relates to the current interpretation in social-ecological science. I suspect that it is the normative use of resilience that has determined its widespread popularity. In our paper it is this implicit or intended meaning that we focus on; the way many actors in the Horn of Africa and globally have adopted the term Resilience to describe their development investments.

The origins of our paper ’Resilience and Sustainable Development: Insights from the Drylands of Eastern Africa’ were a response to the large amount of money being invested in resilience building and concern that the concept was poorly understood and therefore challenging to measure. In the drylands of Eastern Africa such misunderstandings in the past have left a legacy of misguided investments and policies that have aggravated poverty and environmental degradation. So whilst agreeing on definitions can sometimes be tedious, in this case the underlying meaning is of great significance.

Understanding the development process and how it unfurls against those headwinds is crucial to understanding the nature of development outcomes. The relative steadiness of the development process can be highly informative of progress towards long term development goals. We can examine whether smooth, steady growth on a particular trajectory is preferable to a more volatile progress. Which pathway is more likely to stimulate innovation? Which is more likely to lead to equitable outcomes? Which of these pathways leads to the greater long term transformation of societies or ecosystems?

We coined the term ‘development process resilience’ to imply continued progress towards development goals. As we wrote, the underlying system resilience may sometimes be crucial for this progress, but that cannot always be assumed. In rural Africa, rapid rates of urbanization are driven by the pull factor of industrialization and the push factor of rural destitution. This may be an indicator of the response a dynamic, resilient system at the society level, but is harder to reconcile with the intuitive, normative understanding of resilience or with the notion of resilient people and resilient communities. It is at exactly this level that investments in building system resilience could conceivably be at odds with the overall development process.

A widely used definition of resilience is the ability of a system to absorb shocks without changing into a ‘qualitatively different state’: to change whilst remaining fundamentally the same. This is where greater insight is needed: many people’s vision of the future of east African pastoral societies could be considered as a qualitatively different state from what we have now. Greater examination of this ’qualitative’ distinction between adaptation and transformation could help move discussions around resilience from something quite conceptual towards some very practical matters around societal transformation and what sort of changes we expect from development. How are development pathways affected by shocks to the system and is this something we should necessarily aim to stabilise? How important are pastoral drop-outs and urban migrants to the future of viable pastoral societies? Can this dislocation be better managed for more equitable outcomes?

Developing Theories of Change could certainly help come to grips with these questions, but different Theories of Change could potentially contradict at different levels, leaving the ultimate outcome one of political negotiation. Development often comes down to such realities and pastoral societies are often the most disadvantaged in these negotiations. Perhaps the most crucial argument from resilience theory is therefore that by enhancing governance and rights we can enable transformative capacity. This echoes Amartya Sen’s 1999 treatise on Development as Freedom and provides simplification of an otherwise quite challenging concept.