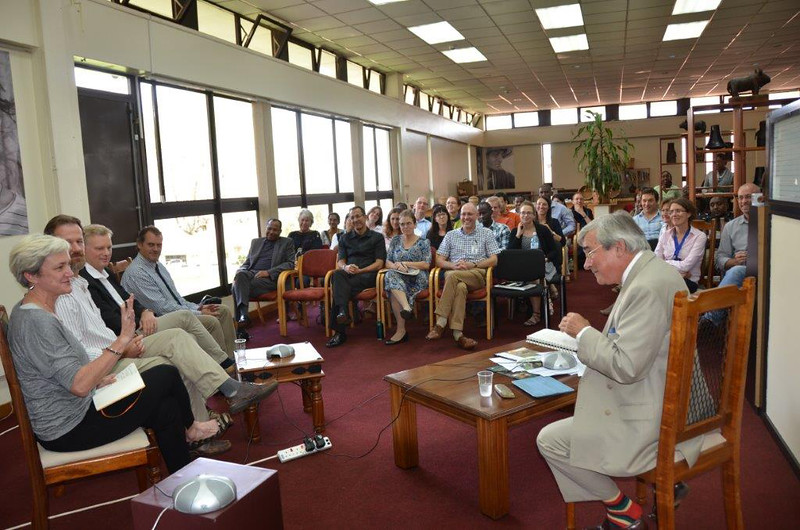 On 28 May 2014, Brian Perry, a former program leader at the International Livestock Research Institute (ILRI) and a well-known analyst of livestock-for-development issues, engaged four senior scientists from ILRI’s Livestock Systems and Environment (LSE) program in a thrilling ‘hard talk’ interview on the role, relevance and impacts of ILRI’s research in livestock systems and the environment.

Panelists at the interview, which was part of a series of a monthly seminar series organized by the LSE program, were ILRI scientists Polly Ericksen, the LSE program leader, Tim Robinson, a spatial analyst, Klaus Butterbach-Bahl, a bio-geo-chemist and Todd Crane, a climate adaptation scientist.

Perry structured the hard talk around several questions including:

Where have the ‘people’ gone?

Perry was in charge of the group that introduced environmental impact research at ILRI’s predecessor, the International Laboratory for Research on Animal Diseases (ILRAD) in the early 1990s. Subsequently, the People Livestock and Environment theme was introduced, which has since metamorphosed into the LSE program. He was keen to find out if the ‘people issues’ are still central in the LSE program, or if they have been moved to another ‘home’.

In response, Polly Ericksen emphasized that people are still central in the LSE program which embraces a systems approach in research, since people are part of livestock and agricultural systems and humans have a larger impact on the environment than any other vectors.

During the interview, it emerged that a systems approach still occupies a large place in the LSE’s research. Tim Robinson emphasized that the agro-ecological zoning system (entrenched in Kenya by Helmut Schmidt who produced a farm management handbook in 1982) is still relevant today and is very helpful in defining systems and their contribution to mapping.

But paradigms in pastoral systems research are still evolving and translation of findings into policy recommendations has been slow. Ericksen said little ecological research in pastoral areas means there is little data around stocking rates and forages, for example, even as demographic and land tenure systems change. The LSE program is, however, focusing its research in these areas including seeking an understanding the role of social systems in pastoral areas.

The LSE program is, for example, looking at shifting its focus onto fodder and grazing area availability in northern Kenya, as a result of interests among pastoralists to engage more in commercial livestock value chains. ‘We are looking at exploring options and models that work for fodder and grazing management in extensive pastoral systems and holistic management of these areas,’ said Ericksen.

How is ILRI addressing livestock GHG emissions in developing countries?

The publication of Livestock’s long shadow: Environmental Issues and Options in 2006 by the Food and Agriculture Organization of the United Nations (FAO), led to a global reaction very vocal and anti-livestock, which was countered by a strong response to determine the carbon footprints of agricultural production in Western countries. Perry sought to know what research is being done in developing-country settings to match the understanding of carbon footprints in the West.

The discussion about carbon footprints is mostly driven by developed countries but there are now efforts to establish the GHG emissions in developing countries, including initiatives to support developing-world economies and motivate them to reduce carbon footprints.

Most of the emissions in developing countries (about 80%) come from agricultural systems and mostly livestock production and there is need to understand quantities, identify hotspots and develop solutions to these emissions. ‘ILRI’s Mazingira centre is responding to this by opening opportunities and building capacities of local researcher to quantify GHG emissions from livestock,’ said Klaus Butterbach-Bahl.

‘Although the importance of livestock in GHGs emission source cannot be overlooked, the main driver of GHG emissions in Africa is deforestation,’ said Butterbach-Bahl. ‘This means we have to look at the drivers of deforestation, another issue which has not been quantified correctly.’

Most (about one-third) of the emissions in Africa come from land use change including expansion of farmlands. Hence, this calls for smart strategies to reduce GHG footprint volumes. Todd Crane also emphaised that there is also a great need to acknowledge what people do and want to do with livestock, due to their multi-functionality in Africa. Crane, further mentioned that it would be useful to adopt approach such as life cycle assessment (LCA) which helps in getting the bigger picture when assessing the estimates in GHG emissions.

The direction taken in addressing climate change issues and GHG emissions boils down to the choices we make and the analytical tools used, which have huge ramifications based on conclusions. Said Crane

Livestock’s long shadow has had a major impact on private sector in the developed world that has had to work hard to convince their consumers that they are conscious of the GHG effect and are also trying to measure these. These have been successful largely because they are commercial systems in the developed world. How can we get these types of measurements in smallholder settings?

Butterbach-Bahl emphasized that research at the Mazingira centre involves looking at key industries and key emitting sources such as livestock production systems including considering animals feed intake, productivity, and turnover to finding out key production areas and productivity measurements of GHG emissions.

In terms of out scaling and engaging stakeholders in livestock and environment research, the LSE program is working closely with government and development agencies in several areas for increased impact. One area is in capacity development and building capacity of partners to understand complex environmental and production systems.

We are looking to engage with governments in building the capacity of the public sector in this respect, said Ericksen.