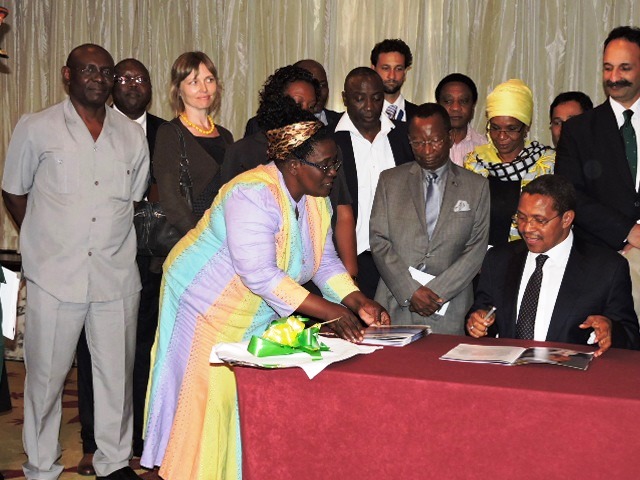 On Monday 20 July 2015, in a meeting organised by the International Livestock Research Institute (ILRI) together with other partners in the livestock sector in Tanzania, President Dr Jakaya Mrisho Kikwete launched the Tanzania’s Livestock Modernization Initiative (TLMI). The Initiative had been prepared during an intensive week-long meeting of livestock experts drawn from Tanzania and abroad.

During the meeting, a strong component of the discussions, also reflected in the TLMI itself, was the issue of rangeland. More than 70% of Tanzania’s approximate 25.8 million cattle and other livestock are bred and managed in Tanzania’s rangeland. However, the Ministry of Lands in Tanzania records that only about 1.28 million hectares or 2.1% of the 60 million hectares of rangelands is protected as grazing in village land use plans. The rest of the grazing areas rely on informal agreements and the weakening capacity of local rangeland users and customary institutions to protect them.

Crop farming is prioritized over livestock despite questions over resulting land use change in both economic and environmental terms. An economic valuation of pastoralism in the Usangu Plain in 2007 showed that if all values were taken into account, the contribution of the livestock subsector to GDP would likely be higher than that of agriculture (See a report by Mdoe and Mnenwa 2007). Yet, conversion of rangelands to irrigated and other crop agriculture in the Usangu Plain continues. Across Tanzania large-scale agricultural schemes, often illegal and haphazard encroachment by farmers, poorly planned infrastructural development contribute to the fragmentation, loss and degradation of rangelands, and the blocking of livestock routes.

Conflicts between pastoralists and agriculturalists are becoming ever common as grazing lands remain unprotected, and even where they are protected through village land use planning, enforcement is lacking. In Kiteto district for example major conflicts have occurred between livestock herders and farmers in recent years, with more than 34 people being killed between 2013 and 2015.

The Tanzania Livestock Modernization Initiative (TLMI) has turned to the experiences of the Sustainable Rangeland Management Project (SRMP) to resolve these problems. The Project led by the Ministry of Livestock and Fisheries Development (MLFD) together with the National Land Use Planning Commission (NLUPC) was supported by IFAD (International Fund for Agricultural Development) and the International Land Coalition (ILC) including technical support provided by the ILC Global Rangelands Initiative, which is coordinated by Fiona Flintan, ILRI and Ken Otieno, RECONCILE (a local Kenyan NGO).

A priority action highlighted by the TLMI is to establish Village Rangeland Reserves. This refers to village grazing areas that have been identified and protected as such through village land use planning. Village land use planning is a legal process led by village governmental bodies to guide land use for grazing, crop farming, settlement etc (as indicated in the Village Land Act 1999 and Land Use Planning Act 2007). Commonly grazing lands are used and managed by a group. Once the land use planning process has been completed, the group can establish an Association (livestock, pastoral or other) and apply for a Certificate of Customary Rights of Occupancy (CCRO) from the Village Council. This CCRO should provide them with the same rights to the land as a CCRO provides for an individual landholding. This is supported in the Grazing-Land and Animal Feed Resources Act (2010) which states:

‘The Village Council shall set aside part of the communal village land to be a strategic grazing-land in accordance with the provisions of the Land Use Planning Act’ Section 17 (1); and

‘The grazing-lands referred to in subsection (1), shall be communally or privately owned by livestock keepers’

Where several villages share a grazing area, the Land Use Planning Act, Section 33 (1) (b) states:

‘….joint land use and management plans should be developed.’

Joint village land use planning and certification of grazing areas

For SRMP, this situation was seen as an opportunity for piloting and testing out an approach already enshrined in policy and legislation, and which could offer greater protection and better management of grazing areas. Two sites were identified for the piloting process – one, a cluster of three villages in Kiteto District, and the second, a cluster of three villages in Chemba (previously Kondoa) District. It was known that these villages shared a grazing area. Over the last two to three years, SRMP worked with the villages, supported by district participatory land use management (PLUM) teams and representatives from the MLFD and NLUPC to develop a joint land use agreement for each cluster of villages. Each cluster established a name for the shared grazing area made up of letters from the villages involved – OLENGAPA (Olkitikiti, Lerug and Ngapapa) and LAHAKI (Lahoda, Hande and Kisanda).

The process of developing the joint land use agreement involved protracted negotiations between the villages and between land users within the villages.

Within Tanzania’s Livestock Modernization Initiative, the experiences of SRMP are specifically mentioned as a good practice to inform the establishment and securing of rangelands reserves through village land use planning and cross-pastoral cooperatives or livestock associations. Additionally the TLMI calls for the securing of national mobility corridors – an action that SRMP has also been pursuing.

Though the experiences of SRMP have not entirely been successful – the joint land use agreement in LAHAKI still needs to be finalized – the Project has shown that Tanzania’s policy and legislation can be implemented in a manner that optimizes opportunities for land use conflicts between local land users to be resolved and to secure shared resources such as grazing for those groups who depend upon them for their livelihoods. It is anticipated that a third phase of the Project led by the MLFD, managed by ILRI and working with IFAD and other ILC members, will provide opportunities for refining the approaches described here, strengthen the capacity of communities to manage the grazing areas, and scale-up to other areas.