Agriculture (not including land use change) contributes on average 35% of total greenhouse gas (GHG) emissions in developing countries today. For years these countries, including Kenya and Uganda, have relied on default emission factors provided by the UN Intergovernmental Panel on Climate Change (IPCC), to develop strategies on reductions of greenhouse gas (GHGs) emissions.

However a large discrepancy between these default emission factors and those of African cropping and livestock systems has been highlighted recently by researchers at the Mazingira Centre at the International Livestock Research Institute (ILRI). For this reason, the resulting projections are likely inconsistent with the actual impact of agricultural activities in the region. In an effort to step up mitigation strategies against climate change, policy makers in Kenya and Uganda have now expressed an urgent need to develop country or region specific emission factors; including the development of cross-sectoral long-term mitigation strategies specific to East Africa.

The Mazingira Centre – a state-of-the-art environmental laboratory enables scientists to measure GHG emissions from a full range of agricultural and other land use sources in East Africa. Since its establishment in 2014, scientists at the centre have worked towards establishing accurate and verifiable GHG emission levels generated in agricultural systems in East Africa. (Read more posts highlighting the centre’s work here). Nevertheless, the scientists recognise that to realise greater impact and fully exploit the potential of the facility, there is need to partner with more stakeholders in the development of sustainable strategies towards reducing GHG emissions. 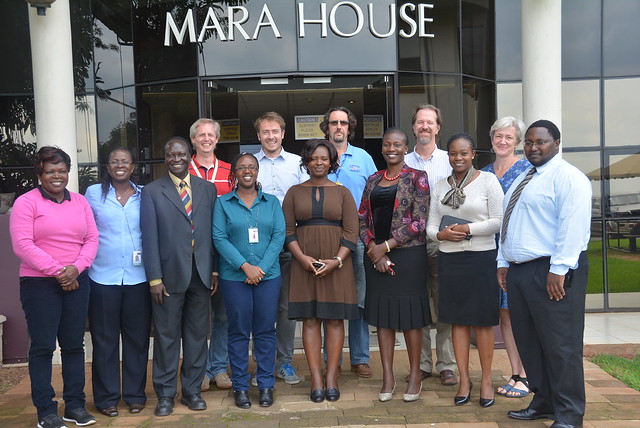 On 3 and 4 May 2016, scientists from ILRI and the CGIAR research program on Climate Change, Agriculture and food Security (CCAFS) East Africa organised and held a roundtable meeting which brought together policy makers from climate change departments of Kenya and Uganda for discussions on development of regional GHG inventories.

While giving his welcome remarks, Iain Wright, the Deputy Director Integrated Sciences and Polly Ericksen leader of the Livestock System and Environment program at ILRI expressed their delight for such a forum and mentioned that they were looking forward to future collaborations between the two countries and ILRI, to determine country and region specific emission factors.

The Mazingira scientists: David Pelster, John Goopy, Todd Crane and Lutz Merbold; all gave presentations on where and how ILRI is working on GHG emissions across Africa. While speaking on the importance of developing regional GHG emission factors, David Pelster highlighted that predicted emissions can be as much as ten times higher than actual emissions. He mentioned that this could lead to incorrect emission inventories and may ultimately cause the employment of the wrong mitigation strategies.

Todd Crane emphasized the need to consider social dimensions of mitigation to influence uptake of technologies fronted for mitigation and adaptation. John Goopy stated that it was important to identify incentives for smallholders to care about GHGs, by addressing productivity issues, which is what farmers care most about. In his presentation, Lutz Merbold emphasized the need to consider the heterogeneity of agricultural systems in Kenya and Uganda, to realize success in responding to climate change.

Headway in responding to climate change

Commendable progress has been made in Kenya and Uganda in responding to climate change and its effects. In Kenya, the government has made conscious efforts by putting in place institutional and legal frameworks. Speaking during the meeting, Mr. David Adegu from Kenya’s Climate Change Secretariat stated that Kenya’s National Climate Change Action Plan (NCCAP) provided for establishment of a climate change framework policy and law, of which a draft has recently been forwarded to cabinet for consideration. Further, a climate change bill was passed into law last week (6 May 2016).

Kenya has already embarked on a process of developing country-specific emission factors, and GHG inventory institutional structures have been reviewed. Ms Yvonne Nyokabi from the Clean Energy Access and GHG Inventory Low Emission & Climate Resilient Development Project reiterated the importance of the Climate Change Bill, which provided for mandatory sharing of data across sectors and establishment of climate change units in different sectors.

From Uganda, Mr. Chebet Maikut, the climate change national focal point in Uganda stated that in addition to a climate change department with a clear mandate, the National Development Plan further provides for the strengthening of the department to a semi-autonomous agency in under a year’s time. This, he explained would give them more grip on implementing strategies towards mitigating climate change. Uganda, too, have in place a proposed Climate Change Bill which is undergoing the necessary procedure towards adoption.

While remarkable strides have been made in both countries in addressing climate change, there is need for additional efforts, to facilitate policy responses based on evidence. For instance, Ms. Nyokabi noted that even though progress was being made in establishing GHG inventories in Kenya, current data collection systems were not tailored for GHG inventory, leading to poor disaggregation and formats. She further mentioned that there was inadequate technical capacity to generate appropriate activity datasets at source level.

Irene Chekwoti Climate Change Officer in charge of mitigation in Uganda said that the main shortfalls identified were in skilled personnel and access to equipment required to generate emission factors.

The emerging message from the meeting was on the need for the governments to work together with scientists, to build evidence base which would accurately inform their strategies.
The next steps will involve an official submission from climate change secretariat in Kenya and Uganda, detailing their proposed road-map towards realising their objective of generating emission factors.

“What we see going forward is a multi-institutional collaboration between several institutes in Kenya” said Mr. Adegu.

See photos from the event here