Uganda’s agricultural sector contributes significantly to both incomes and direct availability of food in the country. It is also a major contributor to economic growth through provision of raw materials for agro-industries, job opportunities and foreign exchange. Agriculture contributes to about 21% of Uganda’s Gross Domestic Product (GDP). Livestock production is an important subsector of agriculture and contributes about 20% of the agricultural GDP. Within the livestock subsector, the dairy industry is the most important currently contributing to the livelihoods of more than one million dairy farming households through generation of income, employment and food.

Like in most parts of the world, the agricultural sector in Uganda is vulnerable to changes in climate. To address this challenge, agricultural experts are developing interventions to make the sector in general, and livestock production specifically, more resilient to climate change and at the same time reduce greenhouse gas (GHG) emissions. In sub-Saharan Africa, the agricultural sector is the largest source of GHG emissions, a large proportion of which comes from livestock production. Recognizing this fact, Uganda’s Nationally Determined Contributions (NDC) details mitigation actions to deal with GHG emissions. The country is the first in Africa to sign the NDC Partnership Plan as part of its commitment to the Paris Agreement. The plan, which details the strategies that will be employed to advance the Paris Agreement, will direct resources towards both reducing GHG emissions and adapting farming to climate change.

Climate-smart agriculture (CSA) has been lauded by experts in the development community as a major avenue of contributing to food security and environmental sustainability through three key pillars; increasing agricultural productivity, adapting agricultural systems to future climate change and mitigating GHG emissions. A new program for climate-smart livestock systems (PCSL), which is led by the International Livestock Research Institute (ILRI), will support interventions to increase the contribution of livestock production to the three key pillars of CSA across diverse systems and species in Uganda, Kenya and Ethiopia. 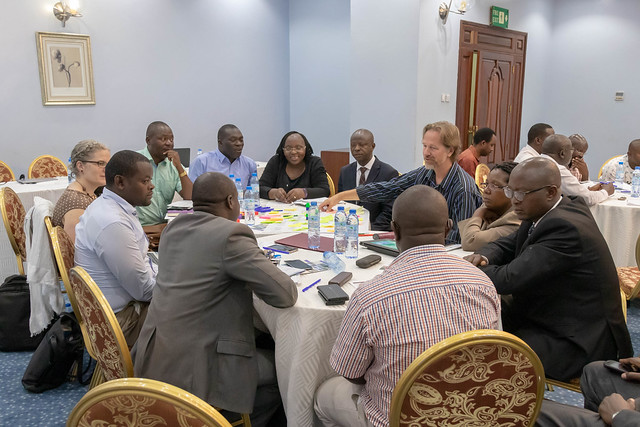 The four-year (2018-2022) program is developing and supporting country-specific interventions to increase the contribution of livestock production to these three key pillars. Also, it will support countries to realize their development goals while also fulfilling their commitments to the Paris Agreement.

The PCSL program was launched in Uganda on 30 April 2019 in Kampala in an event that drew representatives from government, research, development, the United Nations and the private sector. Stakeholders at the launch shared insights that will inform the implementation of the project. For example, it emerged that there are already several initiatives in the country that are geared towards lowering GHG emissions, but the absence of a national GHG measurement, reporting and verification (MRV) system is hindering progress.  As part of the project, ILRI will build capacity of stakeholders and develop MRV tools for climate mitigation and adaptation tracking to support countries’ reporting on progress towards meeting their NDC targets. These tools will be developed in line with modalities, procedures and guidelines of the Enhanced Transparency Framework of the Paris Agreement.

Feedback from participants also indicated that the project needs to support specific climate-smart interventions including promoting climate-resilient livestock breeds and the use of cowsheds to control high temperatures (high temperatures can lead to heat stress, which reduces the productivity of dairy cattle). Farmer education and training were also cited as one of the critical areas where support is needed, to complement the government extension system. 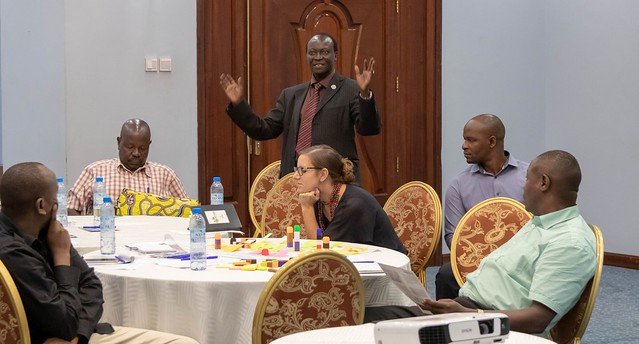 Overall, the stakeholders welcomed the new project saying it aligns with government strategies on climate change and will therefore support the country’s farmers better manage the effects of climate variability.

After the meeting, the project team went on initial field visits to farms in Kiruhura and Isingiro districts, which gave them a better understanding of livestock farming in the country. More specifically, the field visits focused on the southwest region of Uganda, which produces 80% of the country’s dairy products. Feedback from the visits will inform the project design and implementation. 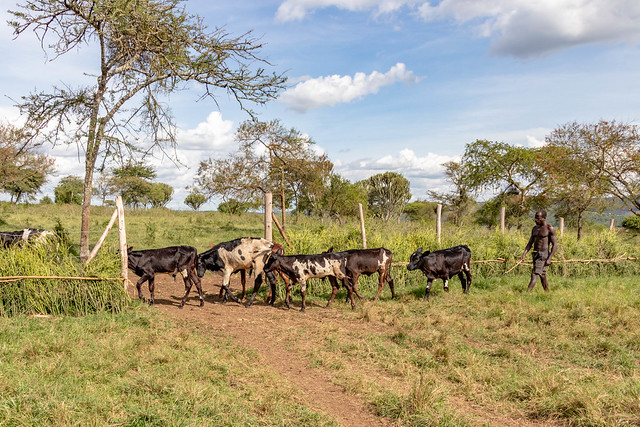 Cattle are brought to the paddock for milking and watering in Isingiro District (photo credit: ILRI/Sonja Leitner).

Initial findings were that most farms in the two districts were relatively large and have had to deal with climate change-related challenges such as more frequent droughts. To deal with the challenge or reduced rainfall, many farmers have constructed structures for rainwater harvesting and storage. The farms were mainly extensive systems with large herds of cattle of Ankole-Friesian cross-breeds. Many farmers had also planted forage plants such as Napier and Rhodes grass, for animal feeding and silage making.

All the farmers visited were organized in dairy cooperatives and their farming practices were more business- than subsistence-oriented. Although some farmers indicated that they face the challenge of fluctuating milk prices, they said that they still make some profit and that there is untapped dairy business potential in the region. 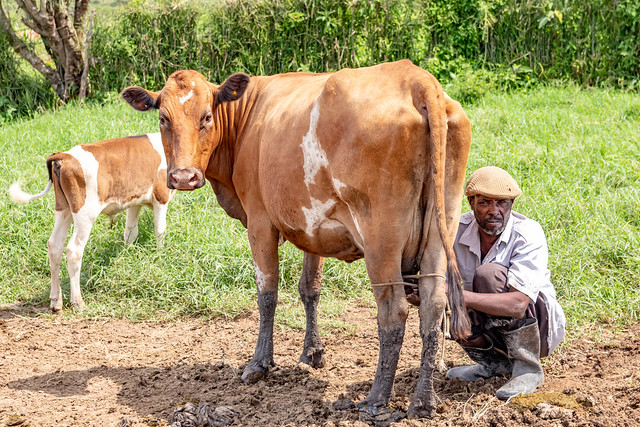 A farmer milks a cow in a paddock in Kiruhura District (photo credit: ILRI/ Sonja Leitner).

The two districts have similar ecological characteristics and farming systems. But the team observed that the uptake of certain farming technologies was limited by the capacities of individual farmers. Several development agencies are working the area and there already exists a robust government-supported extension system which suggests that PCSL activities can build upon these existing initiatives to scale up uptake of interventions. Findings from these and future visits will guide site selection for the project.

The PCSL is financed and coordinated by the German Corporation for International Cooperation GmbH (GIZ), commissioned by the Government of the Federal Republic of Germany.

Read about the project launch in Kenya and Ethiopia.