Written by Esther Kihoro with contributions from Sarah Kasyoka.

‘Maziwa ni dhahabu nyeupe’ (milk is white gold). This is a common phrase among livestock keepers in Tanzania. I’ve heard it numerous times in the last two years as I’ve worked with milk producers in the country. The term is being used to sensitize farmers on the importance of milk as a source of income. Recently, however, the phrase is being used to not only signify milk as a source of income, but also to raise farmers’ awareness of the need reduce the carbon footprint or ‘hoofprint’ of cows.

But do cows really contribute to greenhouse gas (GHG) emissions? This is a question I have been asked frequently over the last two years. The answer is yes. When they belch, cows produce both methane and carbon dioxide and their manure also produces nitrous oxide. These emissions contribute to the warming of our planet.

Other questions I have come across are around the significance of GHG emissions from the livestock sector. Going by the current data from the Food and Agricultural Organization of the United Nations (FAO) in Tanzania, 26% of total GHG emissions in the country come from the agriculture sector, 70% of which come from cattle, either from enteric fermentation (digestive processes that decompose and ferment food) at 41%, or manure left on pasture land at 29%. But these figures are based on estimates made from production systems in European countries, which are also known as Tier 1 countries. There has, as a result, been a need to know the actual GHG emissions of livestock production systems in East Africa.

An ongoing project in Tanzania, known as the Greening Livestock Project is aiming to fill this gap. The project started in 2017 and is being implemented by the Mazingira Centre at the International Livestock Research Institute (ILRI) in collaboration with the  Center for International Forest Research (CIFOR). The project is assessing baseline GHG emissions from livestock in four districts and analyzing the barriers preventing farmers there from adopting low-emission dairy practices. Low-emission dairy practices can intensify milk production by increasing productivity per cow, which would both improve the livelihoods of dairy farming households and lower the GHG emissions intensity per litre of milk produced. This would be a win-win outcome for farmers, which has led to the use of the term ‘greening the white gold’.

The project assessments have been two-fold: 1) the biophysical research to come up with a baseline of the GHG emission factors and 2) socio-economic research of dairy production. The socio-economic research covered 1,200 households in Mufindi, Mvomero, Njombe and Rungwe districts. Data from these households was collected to analyse farmers barriers and incentives, milk marketing and their future aspirations in dairy production. Other value chain players were also interviewed including farmer groups, processors, development organizations and government actors. 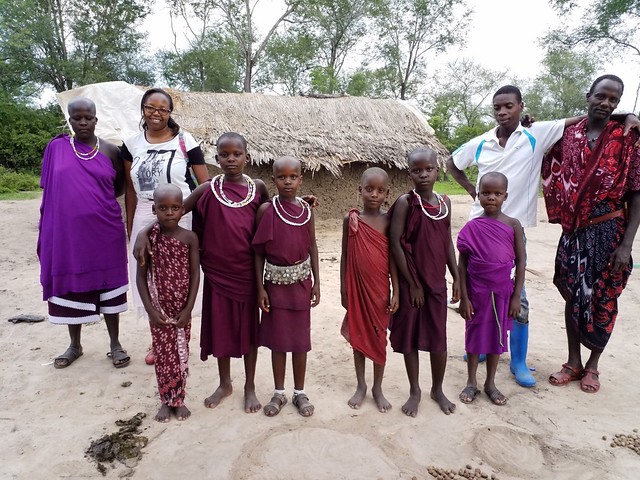 The biophysical research will provide baseline data based on the actual emission factors from livestock systems. Data was collected from120 households in Mufindi and 120 households in Mvomero based on a year-long data collection exercise including information on animal weight, fodder quantity and quality, milk quantity and quality, and surveys on manure management practices.

This project’s work is timely for Tanzania because it will provide key data on current livestock sector GHG emissions levels which is essential for the country’s reporting on the Intended Nationally Determined Contributions (INDCs) as part of the Paris Climate Change Agreement. Although the country has previously submitted its INDCs to the United Nations Framework Convention on Climate, the INDCs did not include ways of reducing emissions from the livestock sector. Additionally, the project will provide data on how much emission reductions can be achieved, and the types of incentives and institutional arrangements needed to support smallholder livestock producers implement low emission dairy practices.

Although all the data collected by the project is still being analyzed, preliminary findings show that there are differences between farmers in terms of their capacity, incentives and barriers to adopting low-emission dairy practices. Some farmers are motivated to invest in the dairy sector mostly because of the income they get from selling milk and other dairy products to ready markets such as milk processors (e.g. Asas Dairies in Njombe and Rungwe districts). Others are investing in dairy farming as a driver of other enterprises. For instance, in Njombe, some farmers are motivated to keep a cow for manure which is used in avocado farms and also for the daily income they get from selling milk as they wait for the bulk money during avocado harvests once or twice a year.

With the understanding that dairy value chain actors (farmers, processors, development organizations and government representatives) do not work in isolation, the project team brought them together, in February 2019, to deliberate on the pathways for a low emission dairy development guided by all the data collected by the project since 2017. Validation and consultative workshops were held in Njombe and Rungwe districts.

The key messages coming out of the workshops were that:

1. improved practices essential in increasing productivity and reducing emission intensities are adopted on varying scale by farmers. Differences are not only driven by margins and revenues from dairy but also from social, economic and intrinsic motivation of farmers,
2. to “green” the white gold will require multiple interventions and investments options in the dairy sector, that are tailored to the needs of specific farmer types and market conditions. These can only be achieved through structured and intentional collaborations among multiple stakeholders within the dairy sector.

Dialogue meetings have been planned between the project team and key actors at national and local levels, led by the African Centre for Technological studies (ACTS) team, to share the findings of this project to help the country tap into the Green Climate Fund, which aims to help developing countries achieve climate change mitigation and adaptation development pathways.

The implementation of this project is supported by local government authorities in Mufindi, Mvomero, Njombe and Rungwe districts ; the Centre for International Forestry Research (CIFOR), ACTS, the Lancaster Environment Centre of Lancaster University and Wageningen University.

This project is funded by the International Fund for Agricultural Development (IFAD) under the Greening livestock: incentive-based interventions for reducing the climate impact of livestock in East Africa project.

Read a related article on ILRI’s research work, in partnership with the Government of Tanzania, to formulate better policies, strategies and action for climate change adaptation and mitigation